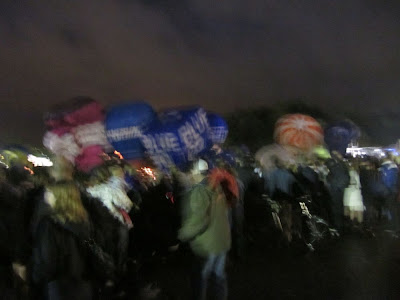 No, not the apocalypse or some hellish nightmare, that's my bad photo of Thursday's nightglow at the Bristol International Balloon Fiesta (not sure what makes it international!). It should be a lovely photo of lots of balloons standing up, glowing in time to music but we managed to lose track of the time and left the pre-balloon pub later than planned. We got a good three minutes or so of glow and Jai Ho though - it was a film music theme... Hmm.
It's a pretty long walk down there, and even the bus doesn't get you all the way. Once you get into the Ashton Court Estate there's a hill to climb and a fairground to walk through. I sensibly wore my walking boots and so was comfier than others, I still got a stitch hurrying down there though!
On our way back (up the side of the hill to Clifton, gah) we spotted a cat on a wall and my housemate decided to climb up on the wall and talk to it. It was an amusing sight, but sadly not one that photo-ed particularly well. 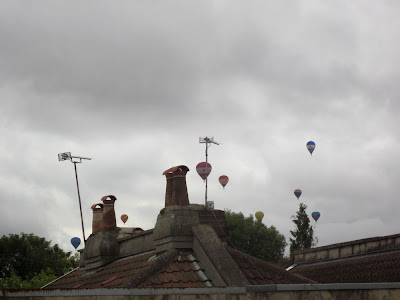 Last year there were barely any balloon launches because it was too windy and rainy, but they managed a few this time. We watched Saturday afternoon's balloons drift across and I managed to catch some of them neatly arranged around the chimneys and aerials from my window. We went to the pub on Saturday evening and some people went on to the nightglow but I couldn't be bothered with all the walking again and so came home to sleep!
That turned out to have been a good decision as I was woken at 7.30 on Sunday morning by a roaring noise which turned out to be this rather low-flying balloon! Only in Bristol*.
I believe this is the same balloon whose pilot got fined £3000 or so for flying too close to the suspension bridge. 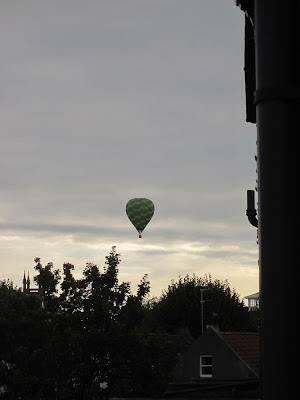 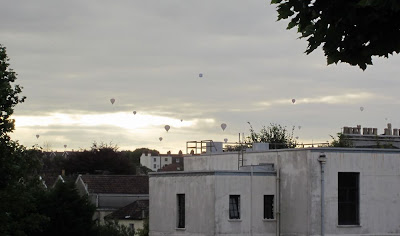 Since I was awake I took a few more photos, this one above looking Eastwards (ish). It was rather amazing seeing so many balloons serenely floating across the sky.
Once I'd had my fill of balloons I got up and caught the little train across to Montpelier, then walked up to Coffee #1 and settled myself in to do some Maths. Anticipating a highly caffeinated day I went for a decaf latte to start with, it's so annoying needing the loo when you're on your own in a coffee shop and loathe to leave your seat and belongings. I sat in the window and watched the world go by learnt proofs, feeling clever when I knew what was going on. 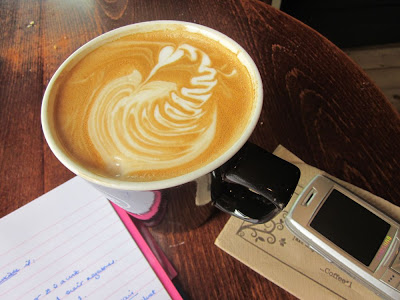 I passed much of the day like that, with a brief interlude at lunchtime in which I bought a reduced cucumber, a brand-new-with-tags dress from the British Heart Foundation shop (pics later maybe), and a "feta and spinach" wrappy-type thing from Bristanbul Turkish bakery. 10/10 for the name 2/10 for the amount of feta in the wrap, it was mostly tomato and onion! Oh well.
Later on I was summoned to the observatory, up by the CSB in Clifton to watch the Red Arrows and the balloon launch. I acquired some strawberries from a grocer on Gloucester Road (hurrah for local businesses and actual grocers!) and my flatmate brought the muffins she'd baked and we had a little picnic.
I wouldn't normally say I'm one for watching this sort of spectacle but it was impressive, and quite a surprise when they appeared for the first time from behind our crowd! (I think they must've started out from Filton, Bristol airport was obviously quite busy judging by the steady stream of Easyjet planes on the horizon). They were clearly performing to be viewed from Ashton Court but our point of view wasn't bad at all (apart from the hoards of people, most of whom unhelpfully stood up when they appeared!) 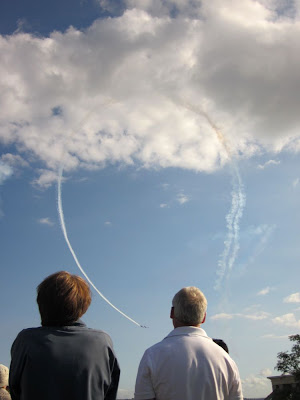 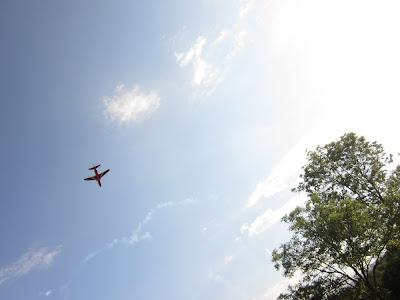 After the display we used the power of science phones to determine that the mass ascent that evening had been cancelled due to high winds, so we went and bought some cider and sat outside with it. A lovely afternoon.


Sad news from the Bournemouth Air Show a week later.

*I have since been informed on Twitter that this also happens in Melbourne. Oh well.
Posted by Dichohecho at 23:41