[insert paragraph exclaiming over how long it's been since I last posted and blaming various factors including coursework, Christmas and boy trouble]

I've gone and promised two crocheted blankets for Christmas, one for my sister and one for a friend. Now they both know they'll take a while to materialise but I'd like to have something started to work away at. While they're in their infancy and fairly small they can easily be taken in my handbag and done during coffee (or even lectures, it's not as distracting as you might think) so progress should be good to begin with.
I went along to Hatchers of Taunton, my local independent department store, yesterday and got the necessary wool. I've gone for 6 x 100g balls of Robin DK for each which should give a good-sized blanket. My sister picked out a strong red, navy and cream for hers.
The other was a little more difficult. The other two friends I've made blankets for both had pinks, purples and blues in theirs and although purple is the obvious choice based on her bedroom I wanted this one to not be too similar. My sister helped with this and I've ended up with a warm brown, beige and deep pink which is hopefully a good combination and one which my friend will like.
Now I just need to choose a pattern for each. I've had a look at my previous blankets and the main three options are:

I had a play about in Paint to mock up some possible patterns, the last one is somewhat difficult to represent though. There's also the question of how I arrange the colours. My musings resulted in this: 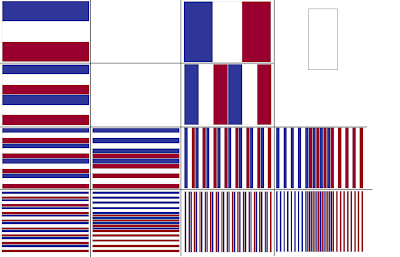 I think it looks rather nice in and of itself!
The designs in the columns where there are only two are slightly more clever, I used this effect on one I made for my Grandma (it's gone to live with her so no photos of that) and it looks alright but there's something not quite right about it. All three colours I used in that were strong and dark and I think it might work better where I have a neutral one like the cream in my sister's colours.
When I make blankets I try not to cut the wool at all until I've finished, just in case it all goes wrong. The blocks approach lends itself to this very well and doesn't rely on me being able to split my wool evenly or keep constant tension (something I'm awful at).
The blanket of ugliness is two rows of each colour per stripe with the other colour being carried along the edge. I went back along the edge in double crochet afterwards to tie these loops in, which you can just about see in the photo. With a bit more thought this could look quite neat.
I think I'll go for stripes for my friend's blanket, and maybe edge it in pink if I have enough left over. I'd quite like to learn how to do fancy edging with lacy effects, there must be tutorials on the internet somewhere.
One of the things I still need to get the hang of (apart from tension) is how to make things the size I want. My first row always ends up being too tight or loose and I get a strange curved effect, think of a scarf that lies in a curve :/ I wonder if this is tension-related? I know I hold the hook in a strange way, when I'm forming a stitch I let go of it completely and hold the knot instead.
Hum. Anayway I don't have any crochet hooks with me at home so I'm not in a particular hurry to decide what to do. Thoughts or other pattern suggestions are welcome.
Posted by Dichohecho at 12:41