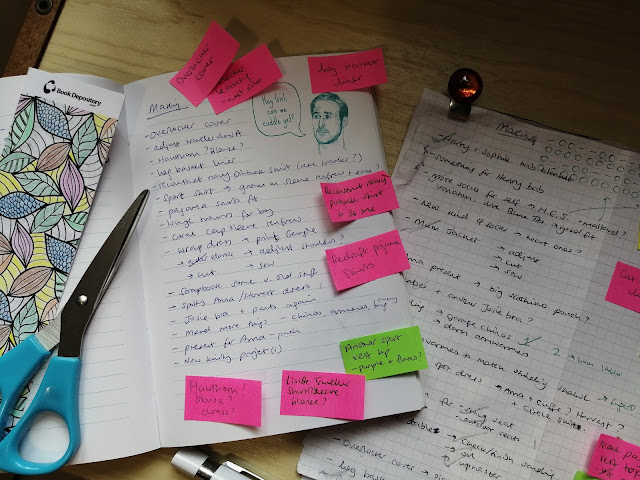 ...lists for making and the making of the lists.

Lists are good, they hold information so I don't have to rely on my brain to do it. I make lists at work so I can context switch without losing the idea of what I'm doing, and so I can tell myself I have in some sense Done The Thing and it is ok to put it up for review now.
Sometimes the lists make me feel like I don't do enough/fast enough, but that often is a sign that the list isn't varied enough or the things on it aren't broken down enough to be ticked off in a timely fashion. I think it also helps to have the lists to hand but not right in front of me - so I can consult them when I want or need to, but they're not staring me down all the time, reminding me that I have All Of The Things To Do.

Last year, while I was on furlough and faced with a big empty expanse of time during which I felt I should Do Good Things I made myself a sort of Kanban board with post-its. There were To Do, Blocked, In Progress and Done columns (and later a Rejected section) and the post-its were coloured according to whether they were admin-y, creative, household/life, or work-y. That made me feel like I had a structure, but I'm not sure I really effectively did the things - I didn't have the constriction of being in the office for x hours a day and having to do _something_ from the board like I would at work. Things were able to lurk in the To Do column indefinitely, and some things moved back across (especially household and exercise related ones). There's a reason we have sprints and the attendant ceremonies in software engineering - just Kanban-ing forever with no retrospectives means you don't reflect on what you've achieved at all and your sense of time passing stays mushy.
I'm not going to start doing sprints for my hobbies with reviews or anything - I think my 20-something before 20-something posts on here are the closest I'll get to that - I don't want to turn all of life into work. So, if my sense of time is mushy then maybe my lists can be too.

I have a list I made some time in the latter half of 2020 that is essentially a "what should I make next" list containing all the things I felt I should make next at some point in time, and I have almost completed it without explicitly trying. I like that. It lives on the shelf next to my overlocker and I occasionally remember it exists and have a look.
I also have a (Ryan Gosling) notebook which I have used as a general notebook on and off for a while that gets general to-do lists, bits of information, packing lists, recipe notes, birthday/christmas gift ideas etc written down in it. I'd like to get back into the habit of using that, and the making list probably belongs in it.
Making a making list is basically a way of sitting down and turning some swirling ideas, needs, and inspiration into more concrete ones that I can actually act on. Refinement, to borrow another software term. Some people criticise refinement and planning as pointless talking rather than doing, but if you don't sit down and comb through your ideas you might steam ahead and realise they don't make sense halfway through. Or, even worse, in a team environment you might find that everyone has made different assumptions and all your "just getting on with it" has meant you've built a big mess that could have been avoided if you'd just talked through it beforehand.

Other lists I have used include:
- Bits of paper with project ideas (and sketches) pinned to my noticeboard
- Lists and sketches of project ideas on loose bits of paper - these get the ideas out of my head but usually get lost
- Lists of what's in the food cupboards and freezer and their use-by dates to remind me of the more buried things. These are stuck to the fridge & inside the cupboards.
- Lists of non-staple foods that I should get around to using (e.g. buckwheat bulgur, interesting spices), and ideas for what to make
- A sort of matrix of what we have in the categories of fruit/veg, protein, and carbs, split into short, medium, and long life so that I can see possible combinations to use up and tick-off the most urgent things