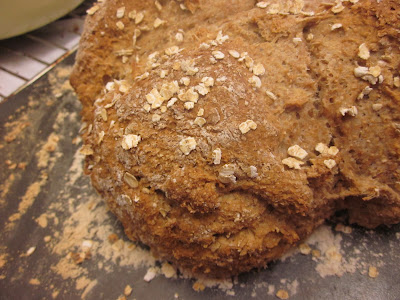 Recently I've been really wanting to re-create the amazing soda bread that I had at The Gurnards Head near St Ives in Cornwall where we took Grandma for a birthday supper. They served it warm with butter and it was delicious. Such a simple thing but so tasty!
I'd looked on the Internet for recipes a few times but lots seemed to contain complicated combinations of fancy flour so I'd shied away from trying it. But then I found a simple recipe by Monty Don in the October 11-17 issue of The Big Issue* with accompanying lovely picture and non-daunting ingredients, it's on the second page of this pdf.
Here it is! 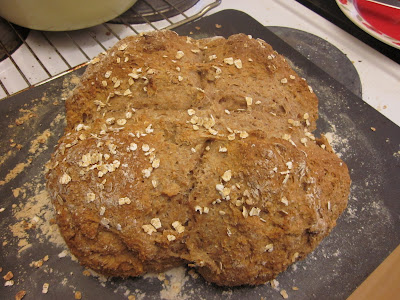 It was lovely! So very tasty with butter or without. We were spurred on in eating it by the suggestion that it doesn't keep well... I stored it in a plastic food bag overnight and it was still moist & squidgy in the morning, but I can't vouch for its keeping any longer as it didn't last twenty-four hours!

Being a horrible cheapskate I didn't want to buy buttermilk (and I might screw it up anyway) so I substituted plain natural yoghurt plus a drop of milk (it was a 500g pot and I didn't bother finding its volume! So much lazy...). Since I haven't tried it with actual buttermilk I don't know how it'd come out, possibly richer? I also made & ate it with I Can't Believe It's Not Butter Light but it only has a little butter in it and it's up to you what you put on top!
The recipe calls for molasses sugar, I have no idea what that is (apart from a special type of sugar) so I used my flatmate's dark brown sugar. I also accidentally put baking powder in before realising it wanted bicarb, but I just added that as well and it came out fine.
So there you go, it's idiot-proof!

This below is the extremely tasty chocolate cake made for my flatmate K's birthday by my other two flatmates. It's from Nigella's old fashioned chocolate cake recipe and the fudge squares on top are from Sainsbury's I believe. Of course the edible glitter and my fabulous Paperchase cake stand make it even better. 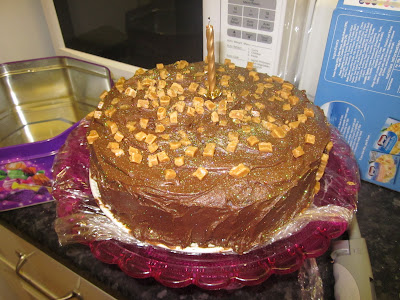 *Which I only ever buy from the amazingly cheery fun guy on the Clifton Triangle (Bristol), he's friendly and will sing to you but won't make you feel intimidated or annoyed :)
Posted by Dichohecho at 20:26