FOOD (a recurring theme in my brain)

Here are a few tasty things I've eaten & discovered in the past few weeks: 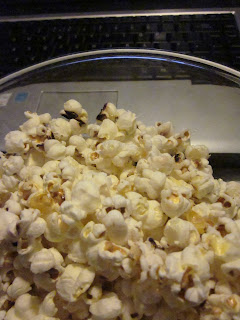 Popcorn done the proper way - It's trial by oil. Veg tastes bad, butter burns, margerine burns (oh my poor, poor saucepan). Next try: olive? Any tips? 69p for a big packet of kernels from Sainsbury's, hurrah! Popcorn is amazing for revision-time snacks, its volume is quite out of proportion with its calorie content.

Baked garlic - 1 hour on 190 degrees C with a bit of olive oil & seasoning. I did mine in a very cute teeny tiny casserole from Wilkinson's, but wrapping them in foil also works to keep the moisture in.

Rosemary & sea salt crackers - From Pastry Affair. These work awesomely, even if you're using 1/3 real butter, 1/3 Flora and 1/3 Utterly Butterly. A great chef I am not.
Personally I'd increase the quantity of rosemary, but then I like rosemary enough to pick it from bushes which are in other peoples' gardens but overhang the pavement. Gallette & mini-tart-things - From Spoon Fork Bacon, adapted twice with good results. Pretty much any combination of softened onions/leeks/spring onions, bacon and cheese is a winner. The small ones I made (1/4 of a half quantity I think) were good for lunches. 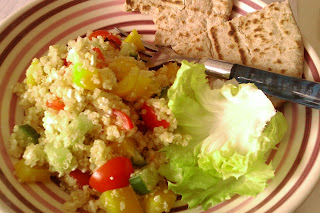 Anna's Quinoa Salad - Quinoa, feta, cherry tomatoes, pepper, cucumber. She used Merchant Gourmet's ready-seasoned quinoa and fancy pointy red peppers, I boiled my own quinoa and used yellow pepper and Basics "Greek Salad Cheese". It's still great. I added a little bit of (reduced) parma ham and had a box of it for lunch today.


I also seem to have been on something of an Italian kick lately: 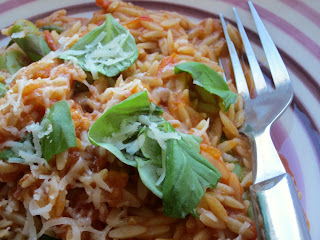 Nutella ice cream - 4 parts vanilla ice cream + 1 part nutella, mix & re-freeze. Tastes like Italian holidays. Mixing is prbably easier with soft scoop ice cream. I remember my sister doing a similar thing with smashed Maryland cookies when we were younger. The combination was a bit too good to be allowed.

Risotto á la boy - May include some or all of onion/spring onion, leek, garlic, celery, pancetta, rice, chicken stock, pepper, white wine, courgette, asparagus, parmesan, cheddar... He makes it well. The first time he ever cooked for me he said he "could probably cobble something together" and then made me risotto and duck (possibly wrapped in pancetta, I can't remember). He's good.

Lemon & rocket risotto - From the back of the Sainsbury's risotto rice box. I used frozen rocket I happened to have and it worked very nicely. I also used grana padano as it's far cheaper than parmesan and chicken stock for richness. Lemon risotto is incredibly fragrant, I think I'll try Joy The Baker's oven version next.

Outside of the house I have had:
Falafel from Schnafel - A huge pitta with 6 organic spiced falafel, plus tahini, tabouleh & salad. I could have had even more salad but opted not to. Not bad for £3.95

Best Yo Sushi day in a while - Tuna nigri, veg gyoza, chicken katsu, chicken gyoza. Missing the point of the sushi somewhat but I can't stand seaweed! 25% student discount is great.


*To schizz, verb. To blend with a whizzy stick (or hand blender if you must be boring about it) "sch" is pronounced like the end of the contraction of casual, pretty sure we don't have a character for that.
Posted by Dichohecho at 23:31