If you went down to the woods Birmingham Rag Market today you would have come across a small hoard of ladies with button rosettes like the one you see above. Almost forty of us, fearlessly led by Kat & Marie, descended upon the midlands to buy, swap, chat, & buy some more. It was a good day.

The rosettes were kindly made by our wonderful hosts, while the very generous & organised Claire provided name stickers (very useful in matching people up with their lunch!), and mid-way through the afternoon produced two large tupperware containers of cake from her trolley. <3

The day started with a walk to Barry's Warehouse, where I became so overwhelmed by the amount and variety of fabric available that I didn't buy anything. I wandered in circles, trying to work out what it was I'd planned to buy, and how much I'd need for the patterns I couldn't remember the names of. After a while of this we headed off to Café Soya for lunch, getting thoroughly rained upon on the way.

The post-lunch swapping of fabric, patterns & notions was quite a sight to behold too. Everyone seemed to pick up something good, and after initially choosing one item from each table (fabric, patterns, notions) and holding back to let more able (and efficient) seamstresses get a pick, there was still heaps to be had. I came away feeling like I'd done rather too well out of the whole thing! 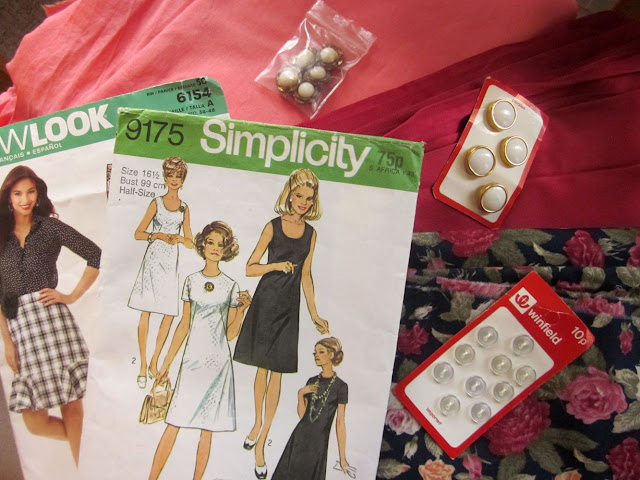 I picked up: salmon pink cotton (from Claire), red/pink vintage shiny fabric (from Marie, who later told me about it), and this rose print printed cotton (blend?), three sets of buttons, and two patterns.
The skirt pattern was exactly what I wanted - it's a simple a-line with a waistband and two back darts - and will hopefully provide some wardrobe staples. The dress pattern was a last-minute choice - I'd assumed it would be tiny, but it turned out to be just about right! (judging on the bust measurement, inches can't have changed since 1970?!)
The pink cotton is destined for an M6503* - possibly with one of those sets of buttons.

Post-swap, refreshed and somewhat drier, we headed on to the rag market. 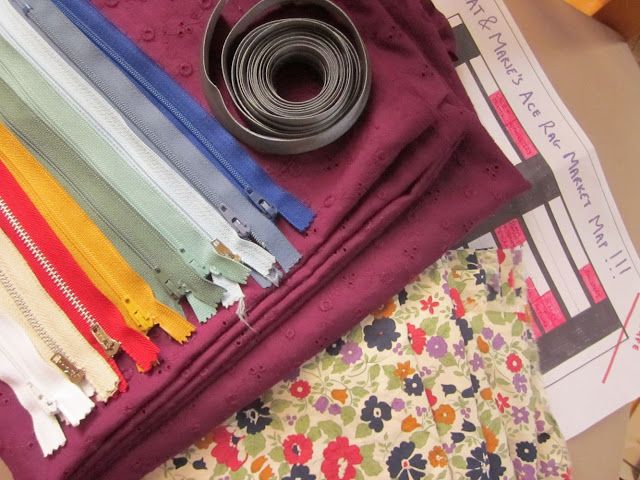 We were equipped with copies of Kat & Marie's ace map (which it was) and allowed to run amok among the many stalls packed with shiny things. Unable to resist a bargain I bought ten zips for a pound - that's got to be a good deal, right? I was also excited to discover the existence of satin-y bias binding. I'm thinking it'd be good for binding seams smoothly and/or giving my makes shiny innards.

Outside I found a stall selling this lovely purple broderie anglaise for £4/metre - I bought two for a skirt of some description. I dithered over and eventually splurged (relatively) on this lovely Liberty-ish printed cotton lawn which was £8/metre. The selvedges are missing so there's a chance that it could actually be Liberty. Either way I think it's lovely. I bought a metre and a half for a blouse of some description (a Colette Jasmine perhaps?)

And finally, after various people had left to catch trains, we visited the Fancy Silk Store. Contrary to its name the shop sells all sorts of fabrics - literally piled up to the roof. I was attracted by various fabrics, including granddad-ish  paisley brushed cotton, but in the end came away with three metres of roses on black at £4.99/metre. It's 100% cotton and looks almost linen-ish but feels very soft. It's destined for some sort of dress, with as full a skirt as I can muster. 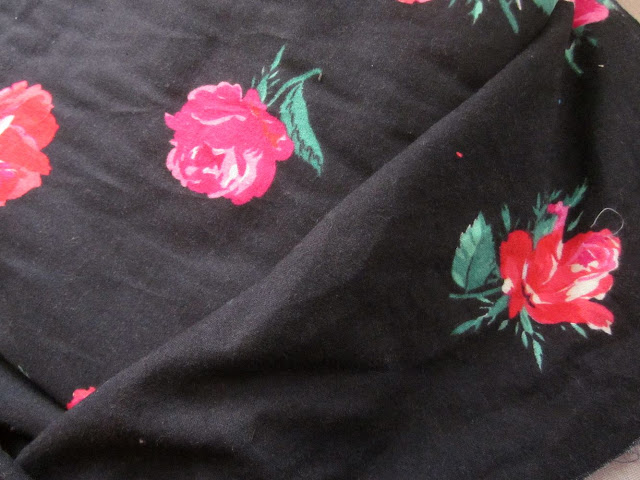 Hurrah for Birmingham!
Thankyou very very much to Marie, Kat, and to Claire too, for making it such a good day. It was great to meet so many people and put faces to blogs, and to see makes in real life! Kat's Minoru, Rose's & Sabs' Sureaus were among the ones I spotted & admired :)

* For some reason the McCall site says that the pattern is for stretch knits. Further down the page (and on the pattern envelope) it says "Designed for light to medium weight woven fabrics". Hmm.
Posted by Dichohecho at 22:34