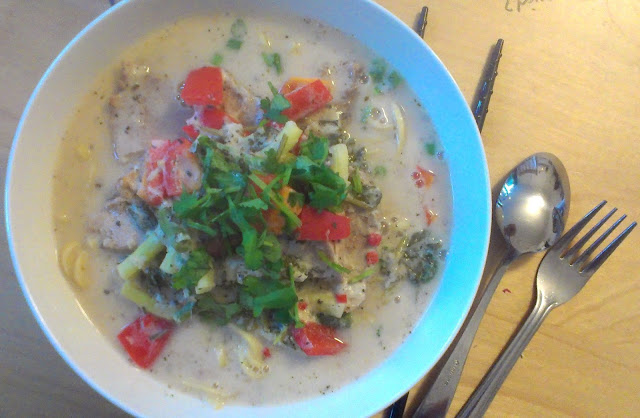 One of my favourite things to eat at Wagamama is chicken itame - it's a very comforting hot, slightly spicy, yet refreshing bowl of noodles, vegetables and chicken in a spicy coconutty soup. You have to be quite careful while eating it that you don't drop noodles back into the bowl and splatter yourself with soup!
Yesterday I borrowed the original Wagamama cookbook from the library. It didn't have the recipe for itame in but it inspired me to try and replicate it anyway. I googled a bit and found a couple of other replications (here, here and here) but, as usual, when it came to making I went off-road and improvised my own version. I ended up making it with roasted pork loin (also easy - I followed the packet instructions) as I couldn't work out where Morrison's had hidden the chicken section! My life is so hard.

While googling I noticed that itame doesn't necessarily mean what you get in Wagamama - it seems to mean something like "stir" or "sauté" - and in fact it's something different in Australian Wagamama to in the UK.
In the UK it's:
"rice noodles in a spicy green coconut and lemongrass soup topped with stir-fried chicken, beansprouts, chillies, red and spring onions, bok choi, peppers and mushrooms. garnished with coriander and lime"
While down under it's:
"succulent strips of chicken marinated in ginger, garlic and lemongrass, stir-fried with red chillies, zucchini, broccoli, red onions, mint, basil, coriander, ginger, garlic and chilli oil. served on steamed jasmine rice and garnished with a wedge of lime"
There are definitely some elements the same, but it's interesting to see the difference -  and good to know that looking for "chicken itame"won't necessarily get me what I expect. Now I've got my own recipe I don't have to worry about Wagamama taking it off the menu and never being able to have it again either :-)

I'm leaving this general (and almost veggie) as the way I made it the elements are assembled at the end, so any protein-y element isn't cooked along with the rest anyway. I think this is a fairly authentic (whatever that means) method, and has the effect of keeping all the different parts fresh and distinct rather than becoming a homogenous mush.
There are lots of ingredients here but it's not complex at all. You can even prepare your protein beforehand and let the soup heat it up at the end.
To go veggie, omit the fish sauce and check the packet of anything that has >1 ingredient. Dried mushrooms might help the depth of flavour in that case (do let me know if you try it).

Noodles - fresh ones that don't require much cooking
Mild-flavoured oil (or something that goes, like sesame, just not strong olive)

LOTS of coriander, chopped
1 can coconut milk - I used low fat
Half a stock cube - you could use a whole one but it doesn't need it
Fish sauce - 4 tsp
Soy sauce - 2 tsp
Ginger - a small lump, grated
Lemongrass - 2tsp of paste or equivalent (remove the sticks before eating if you have those!)
Half a red chilli, chopped - or more if you like things spicy
A pinch of basil and/or mint - I used dry but fresh would be far better
One small red pepper, chopped
Chinese greens, beansprouts, mange tout would all be good - I used green beans as that's what I had

Boil the kettle. Empty your can of coconut milk into a pan, add another canful of boiled water (careful, it'll get hot), and the half stock cube, fish sauce, soy sauce, ginger, lemongrass, herbs, and chilli. Bring to the boil and simmer for ...a while. Maybe 15 minutes, you can't go too wrong here, just make sure the liquid doesn't boil off too much - you want enough for 2+ decent bowls.

After that, heat some oil in a frying pan and stir fry your noodles (as it says on the packet). While heating your pan, add your pepper and other vegetables (but not the spring onion) to the soup. Leave any leaves quite late as they'll cook very quickly.

When you're ready to assemble it all, take the soup off the heat and stir in the lime juice. Put some noodles into your serving bowls, add the protein and spring onion, and pour over the soup. Garnish with coriander and enjoy.
Posted by Dichohecho at 22:02