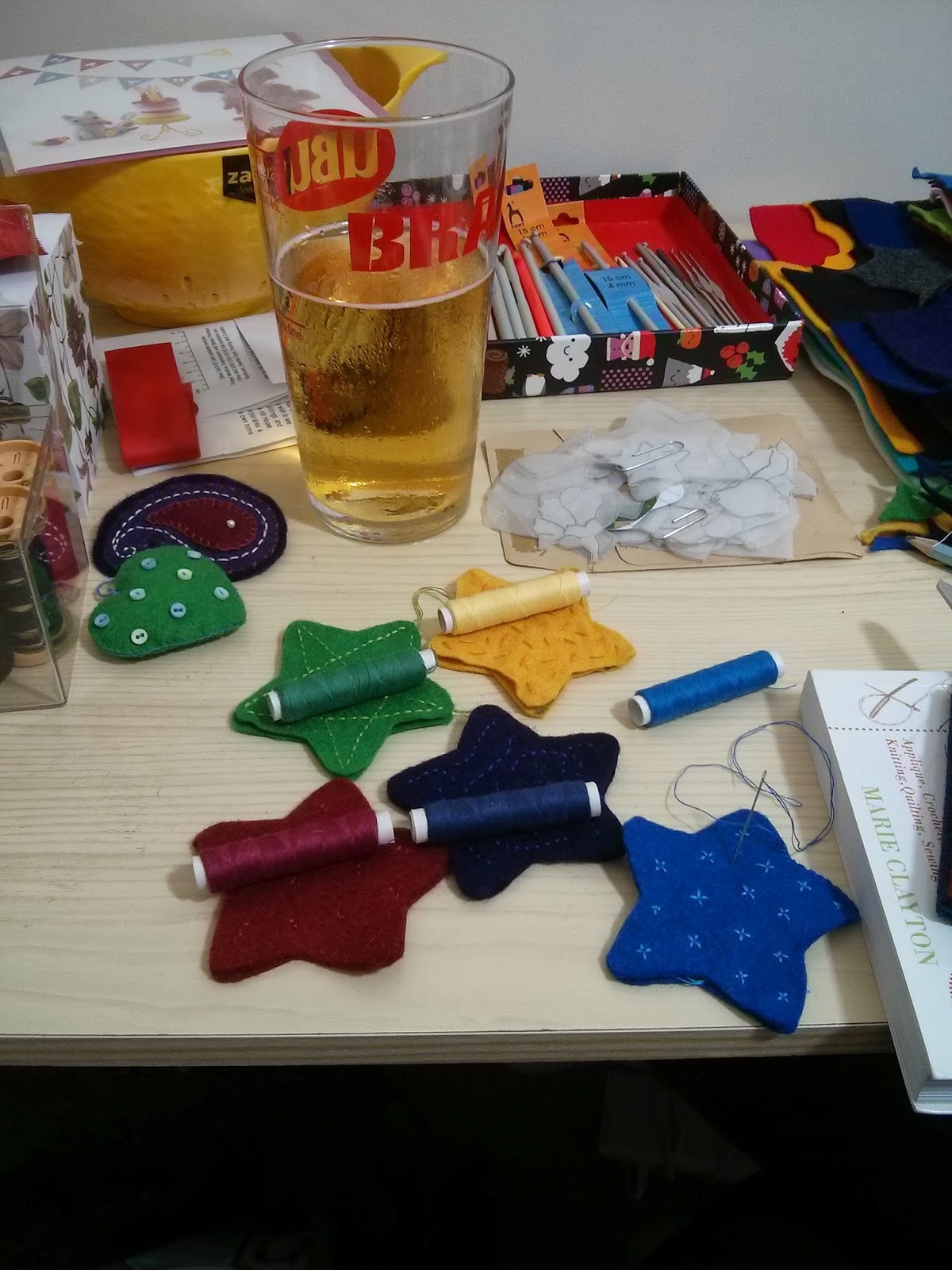 Felt star Christmas decorations for friends - I'd left all my beads and sequins at home so I had to improvise some embroidery. I still can't do french knots. I stuffed these with polyester stuffing & hung them on ribbon loops. 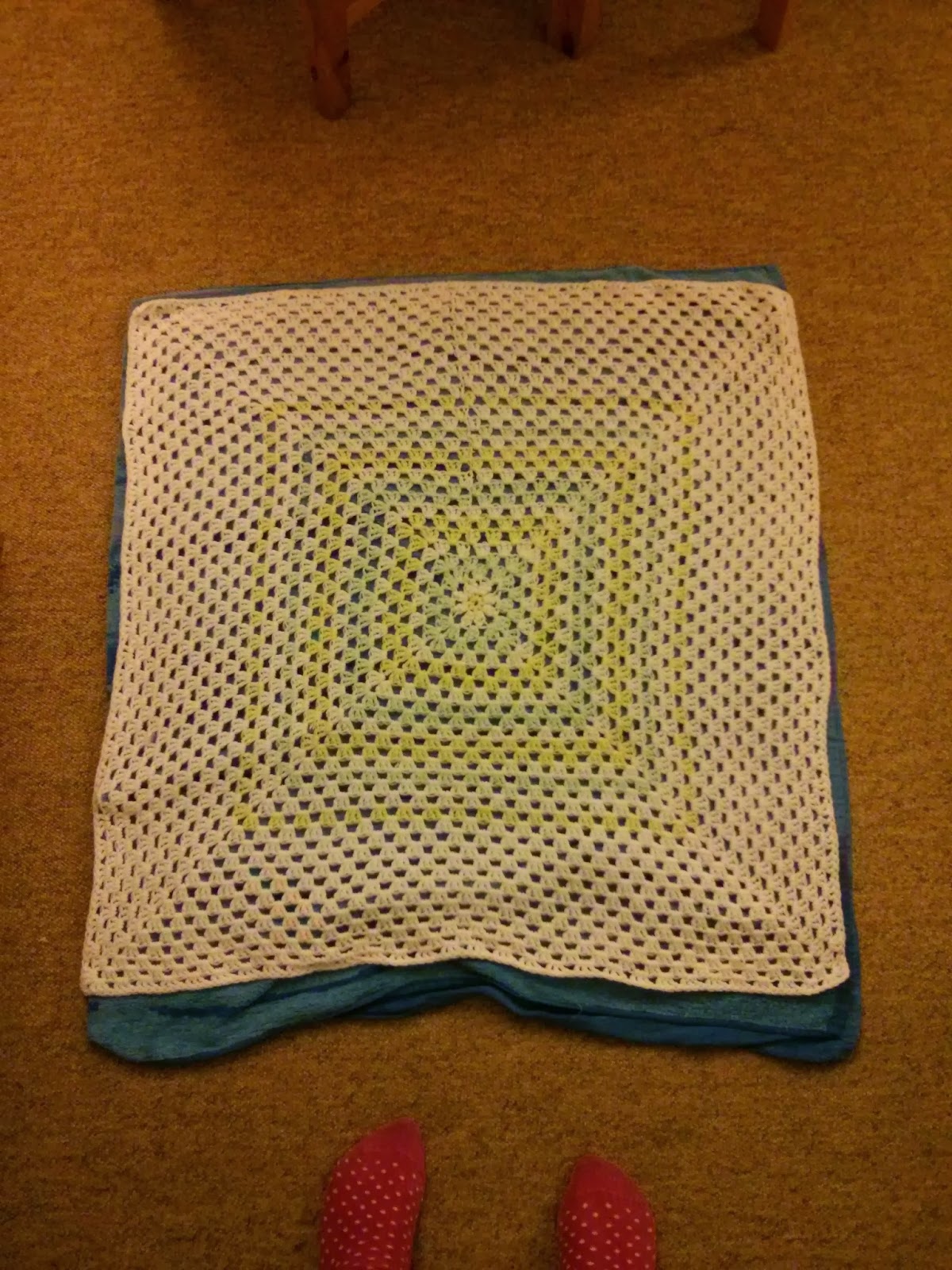 I made a baby blanket for a colleague. I had it almost finished for ages but only got round to weaving the ends in and blocking it after the early arrival of said baby! It's lying on a bath-sheet-sized towel folded in half here. I wanted it to stay useable for a good few years so made it quite large.
I started off with stash wool and purchased a few balls of white to make the blanket up to the size I wanted. I think the Peter Pan by Wendy was the nicest I used, the Hobbycraft bargain baby wool was nowhere near as soft and lovely. The whole thing is on Ravelry here. I'm not one for cooing over babies but I must admit that he looked very cute wrapped up & sleeping. 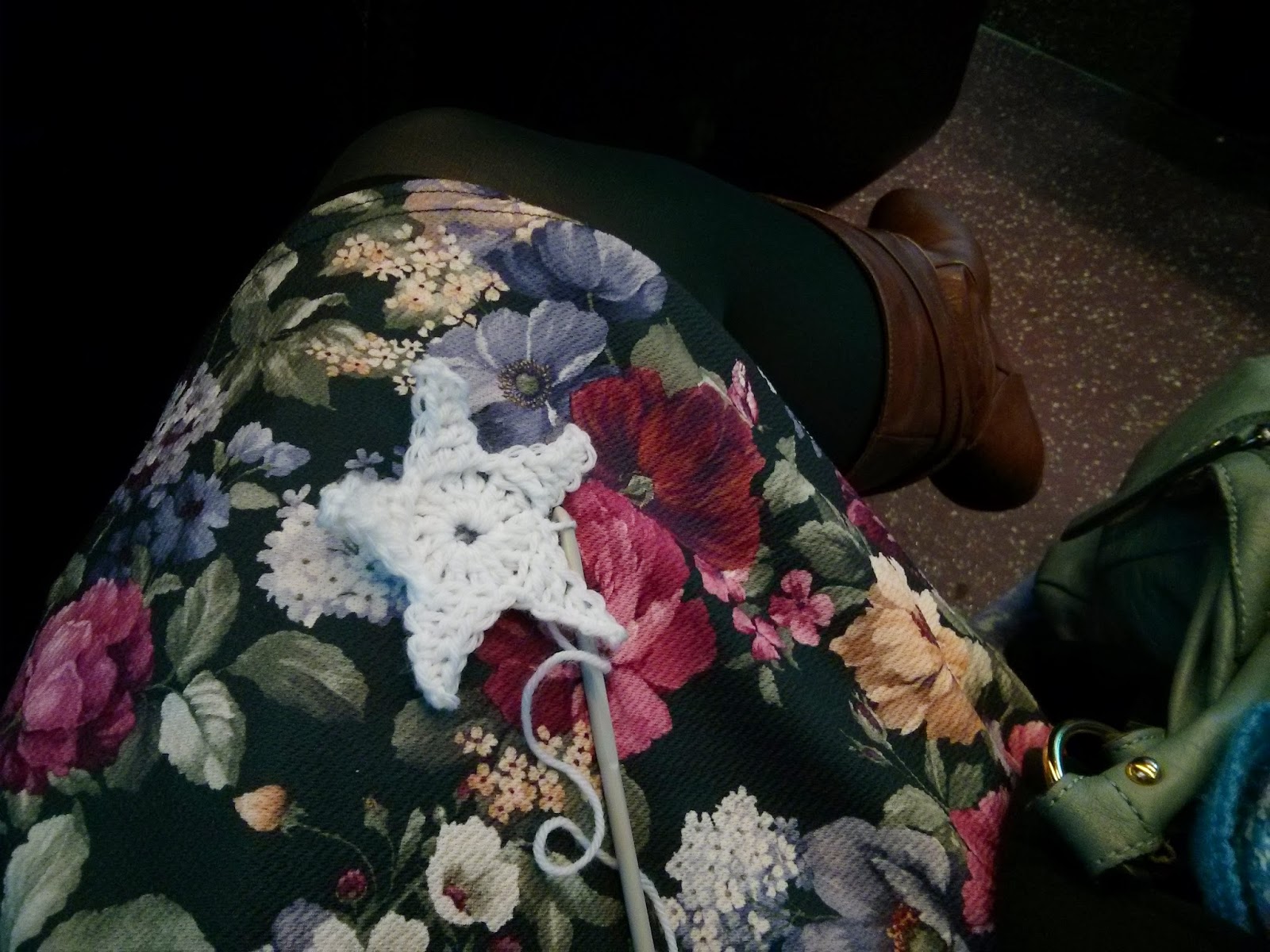 I started making a collection of little crochet stars out of scrap wool. Eventually I may have enough for some sort of garland. 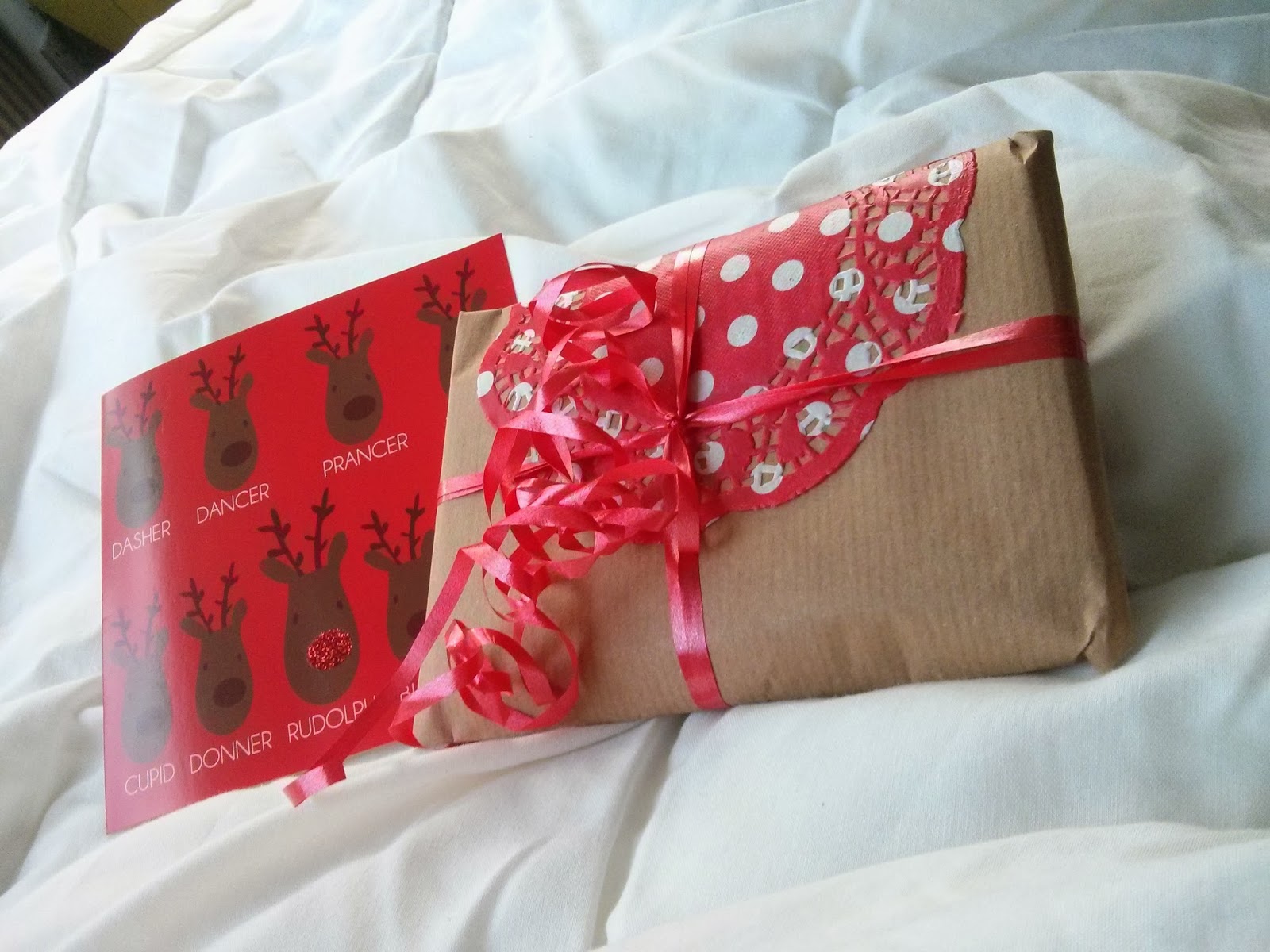 I was lucky enough to receive this beautifully presented parcel in the Sewists' Secret Santa... The card was only signed from Secret Santa so I don't know who was responsible! All I know is the postmark. 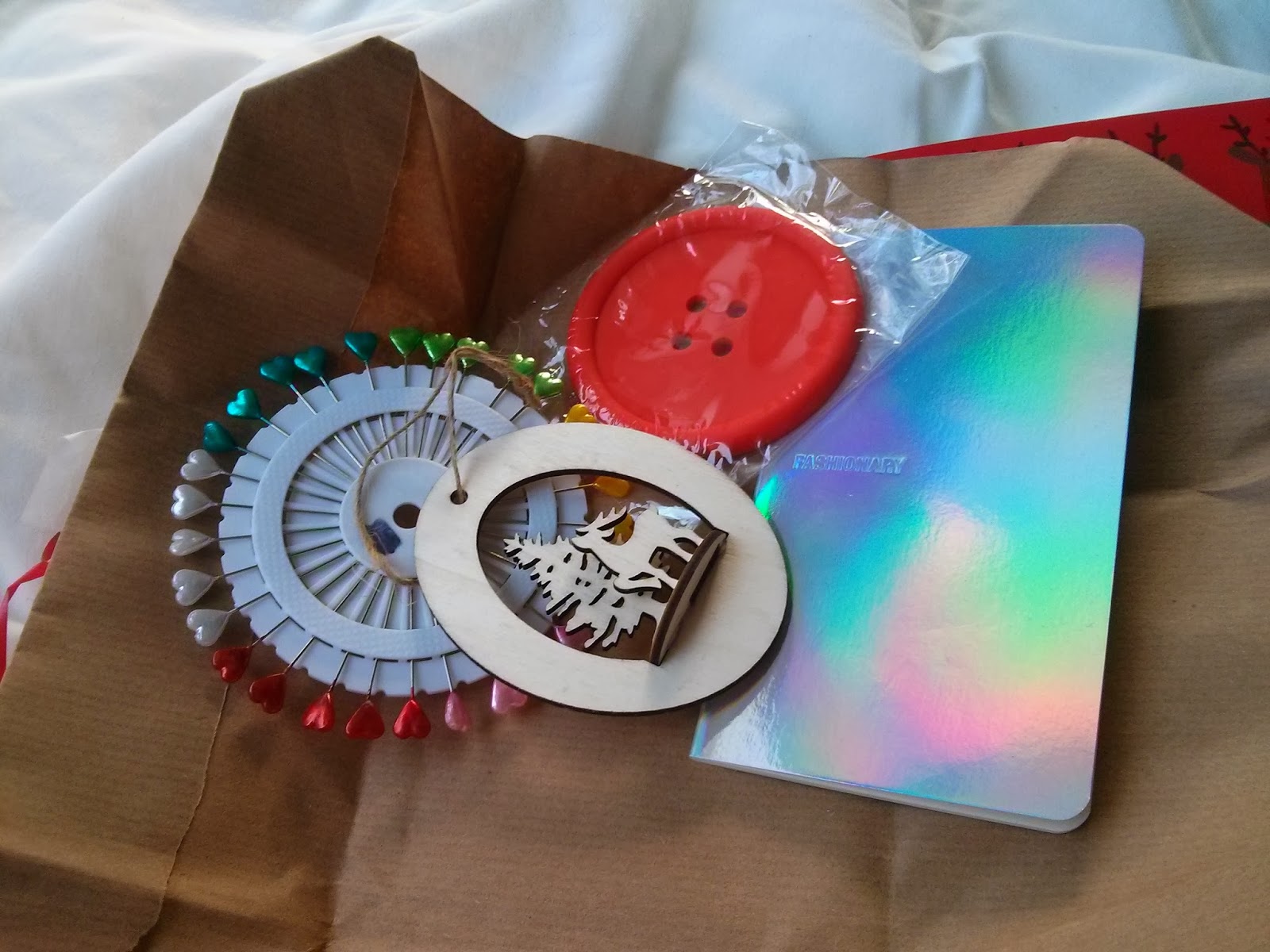 And this is what was inside! Bravo Santa, such well chosen bits - I really love when someone unexpectedly gets it so right - not that I help much with my rather sparse blog.
I'd been admiring Fashionarys from afar for a while so it was lovely to be indulged - I think it'll help me get my ideas down when I'm having a fit of inspiration as I tend to completely forget all my ideas completely. I wasn't sure what the giant button was at first and had an abortive attempt at using it as a kind of window sticker! Then I had a flash of inspiration and googled button coaster. If this isn't what it's meant to be, I'm very sorry but it does a good job :)
I'd like to thank Kat very very much for organising this swap - I'm looking forward to being involved in more, and hopefully being far better at my part of the bargain. I have not seen yet if my Santee has received her parcel - it was going right round the world and I sent it shamefully late :-( 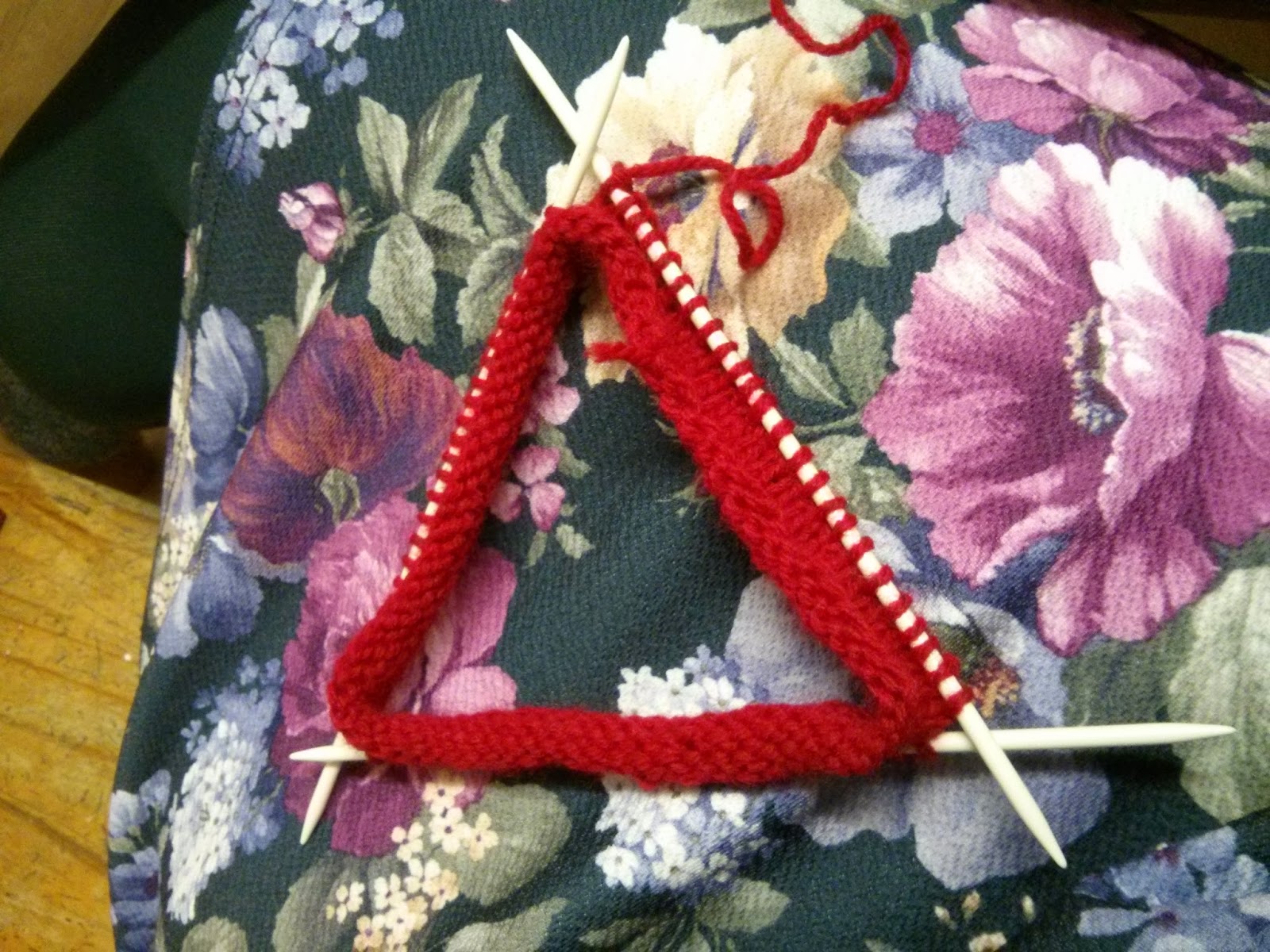 On Christmas day I decided to teach myself to knit in the round using dpns. The perfect willfully lazy winter afternoon activity. This was my first attempt and it only bloody worked!
I followed instructions in How To Knit by Debbie Bliss which I find to be a pretty good book for learning knitting generally. I kept going and eventually decided to experiment with decreasing every 4th & 5th stitch, resulting in an interestingly pointy little hat. Currently it belongs to a toy dog as I don't know any children of the right sort of age. 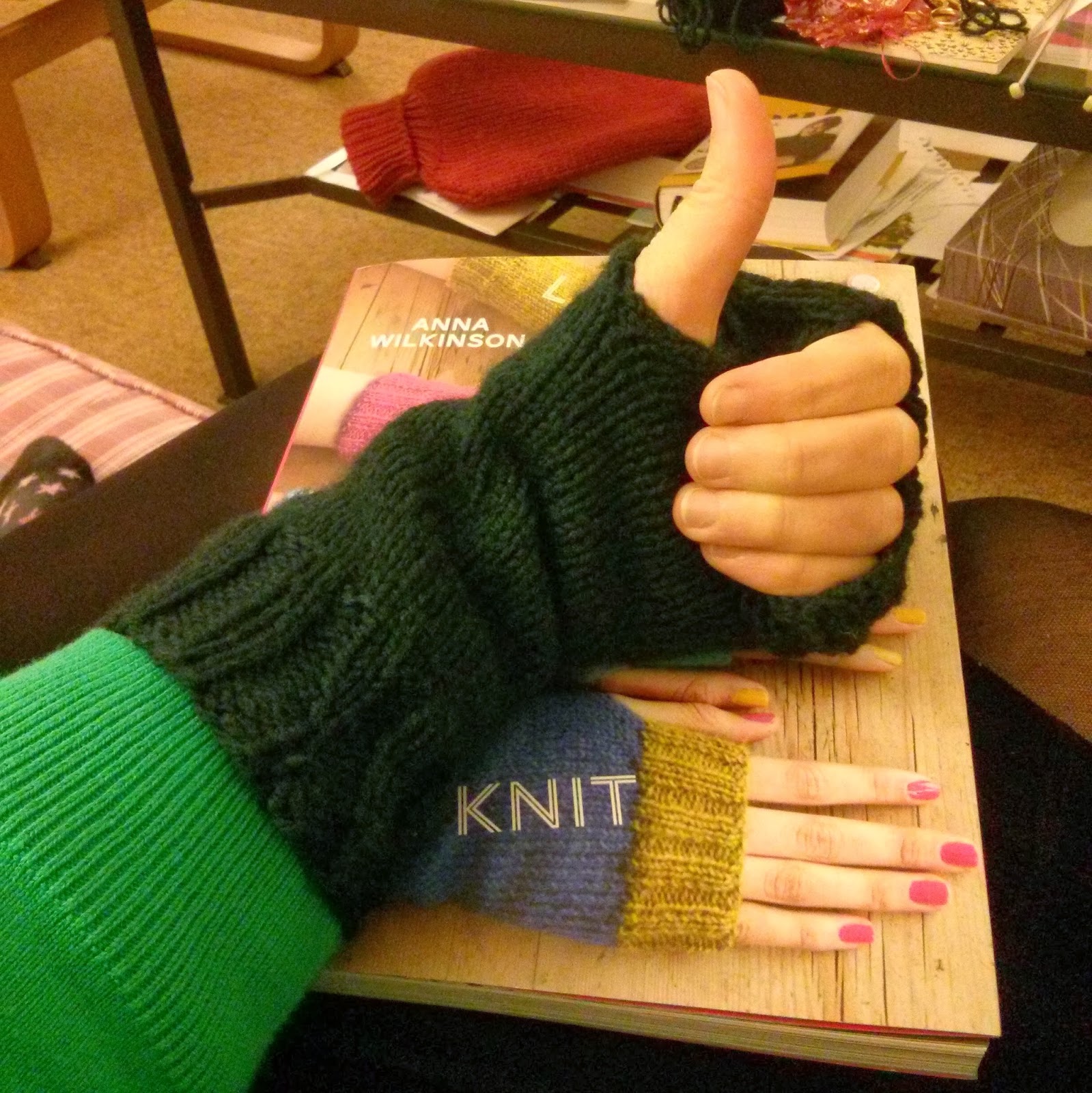 This is my first pair of Wristwarmers from Learn To Knit Love To Knit, as recommended by Magpie Mimi. For this first pair I naughtily used the same sized needles throughout so my rib is a little *too* stretchy. My mattress stitch is not the prettiest either but practice will help. They're on Ravelry here. 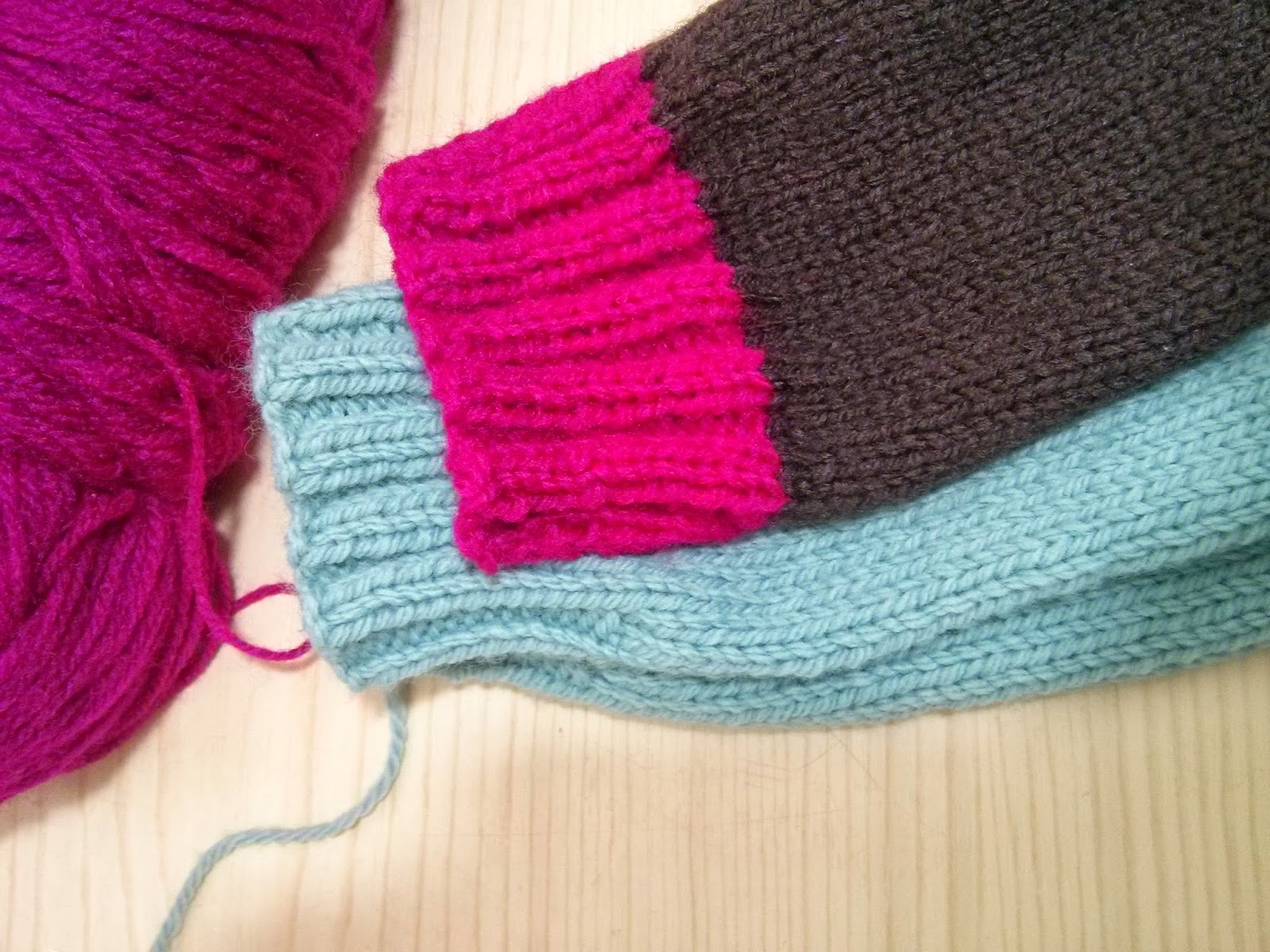 Speaking of which, I'm already on my third pair of LTKLTK wrist warmers. I obeyed the needle instructions for the second minty pair and also changed colours for the third. These two sets are presents. The pink & brown ones are waiting to be sewn up (and washed after an unfortunate beer incident). 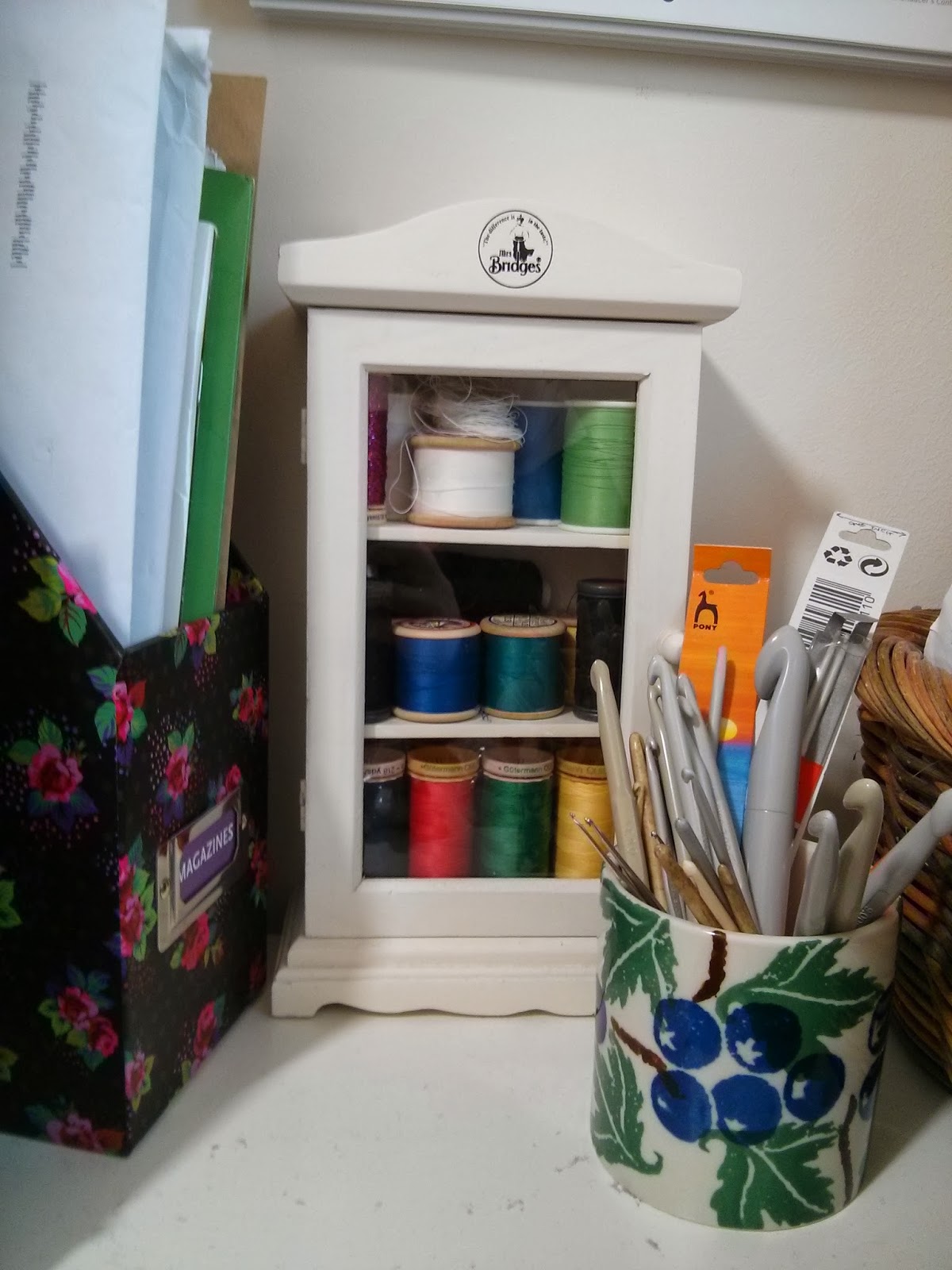 I've been enjoying spending cold wet weekend afternoons (and some evenings) in my craft room(!) arranging things and making plans. I found that this little cabinet - which came from a jam gift set - is the perfect size for holding reels of cotton. I've recently inherited quite a few from a friend's aunt. Some of it is labelled quilting cotton so I need to look that up - I imagine it might be stronger and thicker than normal thread and possibly too thick for dressmaking?
I've also been through my whole (far too large) collection of crochet hooks selected the sizes I didn't have from among the inherited lot. Now I'm in the process of giving away the rest & have had quite a bit of interest from friends. 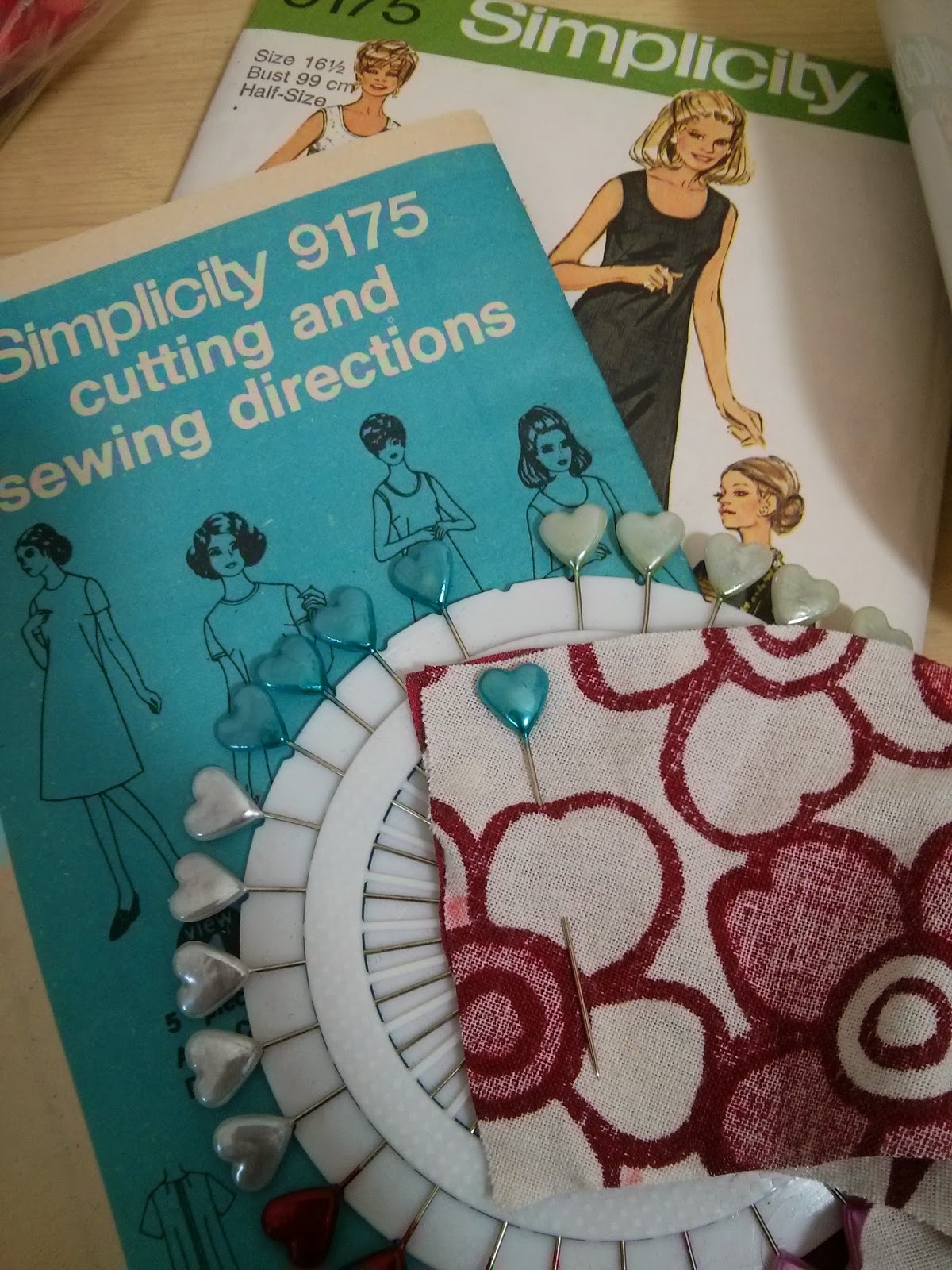 And this is what I've been doing on the sewing front. Simplicity 9175 is an A-line shift dress pattern from 1970. I picked up the pattern at the sewists' meet in Birmingham back in June, right at the end of the swap after having initially thought that there was no way a vintage single sized pattern would be big enough. But it is! To my inexperienced eyes the bust on my toile is nigh on perfect.
The hips were another story (as you'd see if you follow me on Instagram) and I thought I'd have to do some drastic re-drafting to make it work. However I tried taking out the side and centre back seams by 1/4", curving out gently from below the ends of the french darts, et voilá! Suddenly all was well. I was amazed by how much difference this made. I have a slight suspicion I may have stretched the fabric when trying it on, but I intend for my first real version to be made of the leftover cheap navy cotton from for New Look 6154. I've re-pre-washed it so hopefully its shrinky tendencies have been tamed now.
Posted by Dichohecho at 23:25