Becoming A Competent Knitter (in a year!)

Lest I lose track of what great progress I've made in my knitting I'm going to document some of it here.
At the beginning of December 2013 I could knit only wonky rectangles. I asked for Learn To Knit Love To Knit for Christmas and had bought Debbie Bliss's How To Knit after borrowing it from the library. Over Christmas - my first one without coursework in four years - I spent lots of time curled up in chairs and sofas, teaching myself to knit in the round and to increase and decrease. After Christmas itself I embarked on a pair of the armwarmers from Learn To Knit Love To Knit, and two more pairs quickly followed for friends with January birthdays. (Ravelry pattern page, pair two, pair three)

After this I was more confident that "real knitting" was just lots of little techniques joined up (like many apparently complex things). I had seen lots of Miette cardigans about on the internet (including Lladybird and GKs Agenda's KAL) but lacework seemed a bit much still - I wanted something plain but not a baggy, shapeless thing or a tiny shrug I'd never wear. Kristina of Little House By Hand posted about her Shapely Boyfriend cardigan - her first knitted cardigan - and it was exactly what I wanted. The pattern is free and is on Ravelry and on the Knitty website.
I bought my circular needles in Lidl (and they work fine for now, maybe I'll go deluxe and get interchangeable ones one day) and got to work on a tension swatch. I extended my tension swatch and tried out the increases and decreases plus a few practice buttonholes. My Ravelry notes have more detail, but suffice to say I got gauge with my cheap 30% wool yarn (via eBay) and set off. The cardigan is knit top-down in the round so I was able to see it taking shape and try it on once the arms were off the rigid stitch holders. 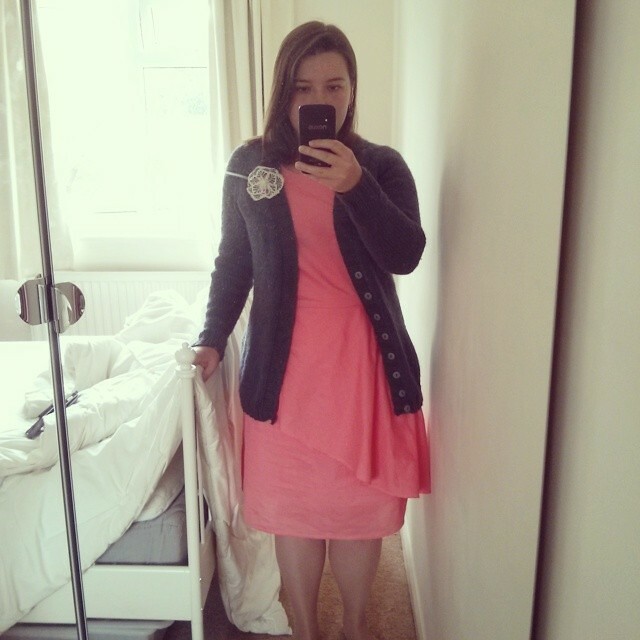 I finished Shapely Boyfriend in mid-April and wore it *loads* during Me Made May - it was definitely a big factor in my being able to exceed my Me Made May target - this blue-grey really goes with everything. There are a couple of cons to this cardigan - the bust could do with being a little wider and the back drapes over my bum in an unflattering way - but it's still very wearable and I had an idea of how to deal with these in future makes.
After Shapely Boyfriend I still had an absolute tonne of the yarn I used so I thought I could safely try out Miette and not be wasting anything if it went wrong (there's my can't-have-nice-things instinct again). Again I swatched and practiced the increases and decreases (different ones) and got going very soon after finishing Shapely Boyfriend. My Ravelry notes document some of the difficulty I had forming the neckline (new technique) and counting right on the sleeves. I finished it on a rainy day in Cornwall. I was a little sick of it by that stage but I made a point of finishing it and it looked pretty cute with my navy truffle (now semi-retired due to fading).

This Miette re-confirmed that cropped cardigans aren't a thing I wear a lot - they look really odd & unflattering with hip-level skirts, so this is reserved for wearing with dresses. My next Miette - and there will be more, the stitch pattern is lovely and the bust fit is great - will be a longer version with longer sleeves. The advantage of knitting such a popular pattern is that there are heaps of helpful Ravelry notes, tips, tutorials, and instructions on how to lengthen and adapt it. It's also convinced me that I ought to buy another Andi Satterlund pattern -the difficulty is deciding which!

I then embarked on a second Shapely Boyfriend, a shorter version. This version suffered a bit from lack of inspiration - I was more excited about sewing and socks - , the need to make Christmas and birthday presents, and my newfound gym habit. Shamefully I started the poor thing in July and have not actually completed it yet. It's been awaiting buttons since mid-November but I don't have any that are quite right - I need to take it shopping with me! I used some very very cheap wool from a local Draper's and could have been more excited about the colour so I think that hasn't helped me get up the motivation to finish it. 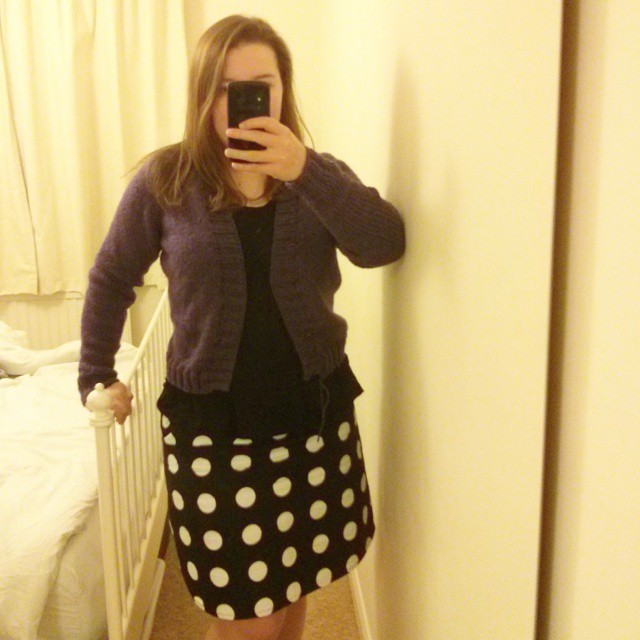 The length is just about ok - I think I could have gone slightly longer. Once the buttons are on I'll be able to tell if it rolls up when done up - the ribbing might be a bit much for such a slopey part of my body. I don't think it looks toooo much like an overgrown bolero...

Next it was Christmas knitting time! This year, giftwise, I knitted one and sewed a few. This was probably about right in the end although I could have started the knitting earlier - I might have managed to get a completed photo of my sister's cowl that way! I made her a variation on the famous GAP-tastic cowl. I searched all over for the right shade of H&M mustard, had a false start with some cotton DK from eBay, and eventually struck warm-toned gold in Wool in Bath. Wool is a nice little shop full of the kind of good quality wool that makes you want to buy it all and roll around in a big pile of yarn all day (as opposed to the apathy-inducing neon or pastel acrylic that does for yarn in some shops). Anyway, I bought King Cole Merino-blend aran and it's lovely. There was a slight *cough* design feature *cough* in the finished cowl - it ended up twisted round twice, but by the time I'd noticed it was too far along to go back and the whole thing is long enough that the twist just adds cose.

So - that's all the knitted items I've completed. My current ongoing project (ignoring some crochet blankets that are languishing slightly) is my first pair of socks! I've been excited about these since I bought the yarn at Tiger in August but I only let myself cast on after the purply boyfriend was finished. They're Wise Hilda's Basic Ribbed Sock pattern - available on Ravelry and on her website.
I started off while sitting in bed with ice on my sprained ankle, got a good chunk done waiting for my x-ray, and started turning the heel over Christmas. I hate picking up stitches along edges so I've stalled a bit currently. I'm starting sharing lifts again this week so I should get some more knitting in soon. I don't know yet if they'll actually fit but since I don't really like wearing socks this was always more of an academic exercise. I just love the colourway of this yarn - maybe I should get some more and make a shawl? Not when I have a huge stash!

Speaking of that stash I think I'll have a look at it and try to come up with some projects - I have a few in mind already, both for myself and for presents.

Here's to another year of self-taught new skills, steady progress, lovely knitted things, and enjoyable knitting!
Posted by Dichohecho at 10:45