Wow, June was busy!
Exams, birthdays, ball, wedding (not mine), shopping for the above, making use of my freedom, getting my results (relief!) and packing up my Bristol life for the return to the parental nest are among the things that have been keeping me away. But here I am sitting at my desk in my childhood bedroom (it seems a bit strange calling it that seeing as I am but twenty two and I've not had a proper home away from it, just halls and student flats).
I've spent much of the last week sorting out the epic mountain of stuff which came home with me, and even going through some older stuff that was already here. The really old has been thrown out to make way for more recent acquisitions. Since I've apparently not cleared things out really properly ever, there was a lot I could throw away pretty painlessly (ringpull collection anybody? I was a strange child.) but I'm only part way there. My old method of tidying seems to have been chucking everything into shoeboxes and stashing them so now I'm going through those boxes one-by-one, separating the junk from the treasures. Hopefully I'll emerge from this process several cubic metres richer in space and feeling like I know what I have.

And now for assorted bits of nice: 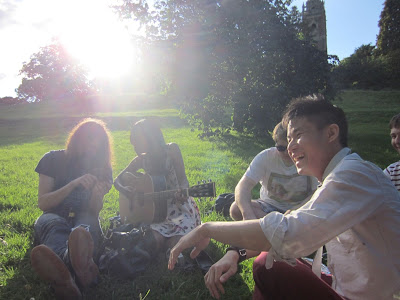 My friend had his 22nd birthday a week or two ago. We lured him to the park and fed him beer and surprise sushi cake. He had his guitar with him and I brought a board game to give back to S so we had a thoroughly lifestyle-y time sitting in the sunshine singing, playing and lazing about. A couple of the boys climbed a nearby tree too. All rather lovely.


This, worryingly, is just part of my knackered shoe collection. What this photo actually represents is "shoes of the year" - all these pairs have been worn to death over a particular period of time. Each of these pairs performed the semi-miraculous feat of fitting my oddly-shaped size 8/9 feet and going with everything. For that I honour them!
The two pairs of boots are the same (I scoured eBay for the second pair) and got me through my first two and a half winters in Bristol.The navy ones in the bottom left are from back in 2007, and the others from various years in between then and now, with the tan loafers being this year's pair of choice. All but those and the pointy ones in the bottom right were unwearable and are now gone.
They're mostly New Look shoes with the exception of the Barratts boots, River Island cherry shoes, and Jane Norman spotty-soled shiny ones. New Look has a pretty decent range of shoes which go up to a size 9 (and it's a 43, their 8 is a 42 - none of this 41=8 nonsense) plus a wide-fitting line (although those normally fall off my heels), and my local New Look is pretty big (I think the chain started in Taunton?).


My newest crochet project is a blanket for my sister. It's a treble crochet wiggle in three colours, each stripe is made of two rows. It was supposed to be a Christmas present last year and, shamefully, I've only just started it. I have been otherwise occupied though, with that degree thing, plus I've been making...

This! My friend M's blanket, her Christmas present last year. It's been pretty slow but there were long periods where I didn't do anything with it at all. It became impractical to carry about pretty soon what with three balls of wool hanging off it all the time. I elected not to cut and weave-in the ends as there were just too many, and not cutting meant I could easily undo it all if need be.
It's all double crochet - each stripe is two rows so all the colour changing happens at one side. I covered this up by making a brown dc border around the whole thing and I think it's neatened it up considerably.
I now have the best part of three balls of wool to turn into something else. I'm thinking of a scarf in some sort of fancy stitch from my new Handbook of Crochet Stitches. I've obviously got a bit less of the brown, having made the border, but it looks like I've still got far more beige. Strange. 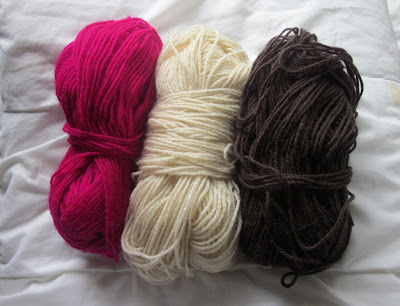 I started adapting a blouse into a Sorbetto while I was in Bristol but that's been put on hold by all this moving business and now I've got plenty to be doing with my project and my tip of a room. I'd intended to get it finished for the Summer Spark Sewalong which I have the badge for in my right sidebar, but it's not looking like getting there yet. Boo. I'll get it out and take some pictures in the next few days though, and probably ask for some advice on how to proceed. I remember it being a tad wonky...

Right, back to sifting through the shoeboxes.
Posted by Dichohecho at 21:20