The Shirtbetto or I Finished A Thing!


This post has been brewing for a while, I didn't get around to writing the post or taking photos for ages. I still haven't worn it yet but I'll try and take the plunge soon!

Almost a year after visiting Birmingham's Rag Market with some lovely sewists I have got around to making a Colette Sorbetto of sorts. Being silly I went and bit off a bit more than I could chew and made it from a button-down shirt I found in a charity shop. The result is wearable-ish and I've learnt a bit about sewing clothes in the meanwhile. 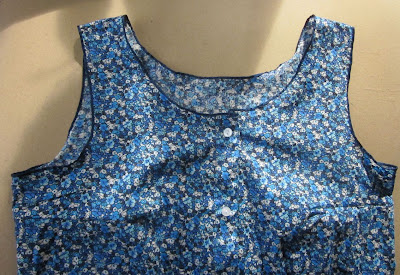 Just so I get the details down I'm going to copy The Sew Weekly's format:


Fabric:  Shirt, fibre content unknown, suspect polycotton.
Pattern:  Colette Sorbetto
Year: 2011
Notions:  Ribbon, thread
Time to complete: Unknown!
First worn:  Not yet
Wear again?  Perhaps
Total price: The shirt was £2ish in a charity shop, the ribbon was from my stash & the thread was Mum's. So £2!

Making:
To make this I unpicked the existing shirt along the side-seams, shoulders and armholes and removed the collar. Then I attempted to cut out pieces to match the Sorbetto pattern from corresponding shirt parts. I did the front in two halves but unfortunately the shirt placket was fairly wonky so it was quite a bodge job. My test patch was more like 3 7/8 than 4 inches square so I cut an American 14 with an inch or two of extra length and it came out alright.


I made french seams by hand on the shoulders while I was in Bristol and had made an attempt at the bust darts and side seams but the result wasn't pretty. On Sunday I unpicked my wonky bust, worked out that one armhole was higher than the other, hacked a bit off it, and re-sewed the darts. I used bright coloured embroidery thread to trace the dart lines which I think helped with accuracy.
Since I was now at home I used my Mum's lovely old Bernina to sew up the side seams, luckily she'd threaded it with navy so my wonky stitching isn't too visible. I french seamed the sides too as the fabric was fraying quite a bit and I like how it looks.

After that came the neck & armhole bindings! I had bias binding but it looked a bit big and clumsy but also too neat. I'd had a glass of wine with dinner and wasn't going back near the machine, so I dug out some navy ribbon from my large stash (I like pretty things & dislike waste...) and set to stitching it over the raw edges while watching 24 Hours In A&E. It was that or the Paralympic closing ceremony and I'm not really a fan of anything Coldplay did after A Rush Of Blood To The Head. Have I Got News For You was on Dave (as ever) and would have been my preference but I have an aversion to Louise Mensch...
Anyway, a few cups of coffee and three fortuitously-sized pieces of ribbon later I had a completed shirtbetto!

Post-mortem:
I think the size 14 is on the snug side of alright, the back is almost perfect (apart from my sway back), but it's hard to tell at the front with the placket weirdness. If I didn't french seam it there'd be a tiny bit more space, and of course the true Sorbetto has a centre pleat whose width can be stolen to fix tightness. I don't think I need an FBA, I'm not far off the C cup Colette patterns are aimed at.
I'll be making another out of the strawberry fabric I bought in Birmingham but I'll have to find some white bias binding (or brave red & white polka dots) and face re-threading Mum's sewing machine.
My binding is a bit wibbly but I noticed the flat parts are where I backstitched - I didn't bother all the way around because it'd take far more time and thread than I could be bothered with. I stay stitched the neck immediately after cutting out but not the armholes and I think they've suffered from it, I have baggy armpits!
I'll be investing in some chalk or a fabric pen before I make the next one, I think it'll help with the fit as I currently don't know which issues are due to my having a strange-shaped body and which are wonky cutting. If I trace the pieces then hopefully they'll be more true-to-shape. It'll help with the darts too, I'm not sure how else one is meant to transfer markings and my method wasn't very easy or accurate.

Anyone know of good tutorials on darts or sway back adjustments?


P.S. I've added Disqus comments to the blog to make follow-up easier. The one thing that really bugs me with blogger is that I have no idea when someone has replied to my comments on their blog. Hopefully Disqus will make it a bit more conversational. Let me know if anything goes wrong!

Email ThisBlogThis!Share to TwitterShare to FacebookShare to Pinterest
Labels: I finished a thing, sewing, shirtbetto, sorbetto