I've been busy revising away these last couple of weeks, and it's been pretty unexciting, but obviously worthwhile. Today I had my first exam (Computer Architecture) and, while there were some horribly tricky bits, I think I generally knew what I was talking about. The paper was sadly nowhere near as nice as the past papers and example questions. My average from the first two courseworks is something like 60%, and that makes up 40% of the unit, so I should definitely at least pass this unit!
Next up is Linear Algebra, which is BIG thing, my Maths units are totally exam based (there's homework every week to help you keep up & to back you up when exams go wrong) so it's pretty important too. Hopefully tomorrow's revision class should give me some confidence.

In between all the revision I've done some nice stuff too, including having lunch with my Mum at a local deli - we shared a plate of 4 salads with bread and leaves and some exciting cheese and drank fancy organic lemonade (Luscombe - it's yummy).  I was too busy eating all that and talking to Mum to take any photos of it but we did persecute someone's front garden with our cameras. These lovely roses are on the corner of the street and the garden also has lots of herbs and a cat. Ideal! 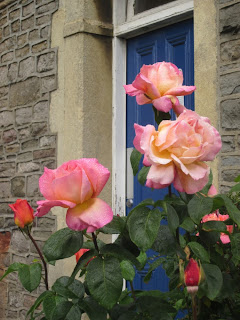 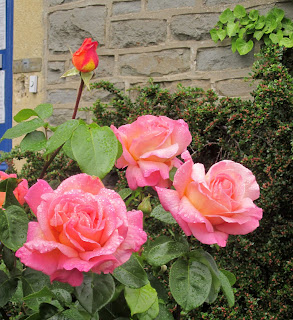 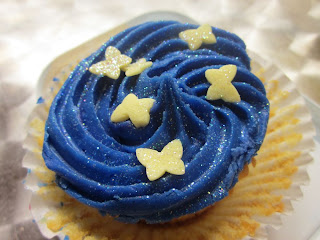 Mum also brought me a pair of lovely sparkly cupcakes from The Mall Deli in Clifton, the other one was pink! Tasty as well as pretty.
One day I went to the darkroom with the boy and some friends to develop our colour films. Photosoc was very kindly given a load of gear by the widow of an amateur photographer and the clever darkroom-y chaps have figured out how to develop and print colour film. It's more exciting and cheaper than taking it to a shop, but of course you still have to scan it yourself and there's always the chance you'll mess something up. Poor boy went and absent mindedly opened the lid of the tank and mostly ruined one of my films, but he's taken on the challenge of scanning it & trying to salvage the pictures. It's a shame it was that film as there was a photo of him in a suit! 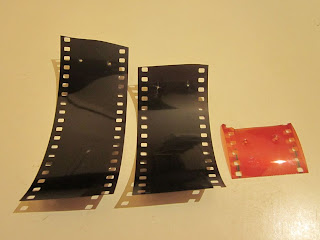 We made little film people! The holes were made by the clips we use to hang the film up to dry. The little one on the left is completely unexposed (a solid black picture) and the other two are completely exposed (solid white). 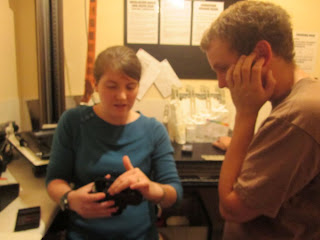 Explaining the many holes in the Holga 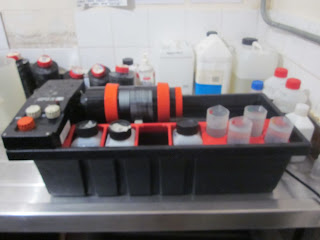 The Jobo! Magical C41 film developing machine
This week has been mostly sitting in the Computer Science department eating fruit (Sainsbury's Basics strawberries - good AND cheap AND from Somerset!) and trying to learn about logic gates and MOSFETS (which annoyingly I didn't need to know in the end). I've also taken a fair few trips to Waitrose on the way home, since their end of day reductions are better than anyone's. Sometimes you can get a really fancy loaf of bread that's meant to be £1.69 for 19p.
On this particular day I picked up reduced parsley and spring onions (potato salad!) and soda farls, which came to £1.02, then I found Pie Minister sweet pies reduced from £1.99 to 49p each, so I picked up two, bringing my total to £2.03. When I went to the check out, the till applied "Pieminister 2 for £3 offer" and took 98p off. Free pie! 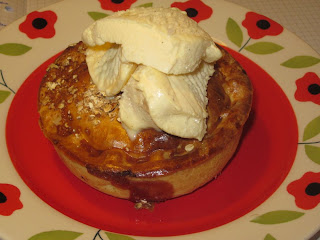 I did feel a bit like I was robbing them but the check-out lady didn't object, and apparently this is a known problem but they can't be bothered to fix it! So yes, apple & raspberry pie and vanilla ice cream. Om nom.
Posted by Dichohecho at 21:38