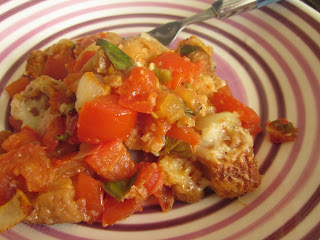 Bread is pretty much my favourite food and my comfort food, and one of the things that often gets reduced at the end of the day in Sainsbury's; so it's not surprising that I occasionally end up with too much of it. This week while I was eating my way through another bargain lot of Waitrose mini bagels (25p down from £1.25) I managed to neglect the end of  the french stick I'd bought last weekend and it went stale. It didn't go mouldy like normal bread though, it just went completely dry and hard. I was wondering what to do with it & thinking of bruschetta-like things when I remembered this recipe I'd seen on Smitten Kitchen. Her version was based around amazing tomatoes from a farmers market, my version is made with Sainsbury's basics and stuff I already had, but it was still delicious. The "croutons" on top stay hard and crunchy but the bits underneath go all smushy and lovely, full of tomato juice. The tomatoes stay juicy too. It's really very simple but also very excellent.
I had some cold when I came back from the pub last night & it was still good & I'm having it for lunch today too! It's tasty enough to be a meal in itself but could also be an accompaniment to, say baked chicken. I haven't decided yet if I can call it healthy, it does have oil & bread in it.
Here's my interpretation of the recipe, using what I had, with only rough measures and made-up timing (plus I forgot the sugar). It still turned out awesome so it's probably idiot-proof! 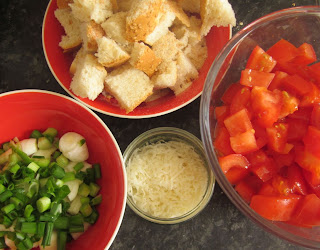 I could be a TV chef...
You need:
Saucepan/frying pan, oven-proof dish, little dishes if you want to be organised as above
Bread - cut into cubes, I used about a 6in/15cm of stale sesame seed baguette including the end
Olive oil - a couple of sloshes at the appropriate stages
Onion - I used half a small one & two salad onions. (I didn't follow the recipe exactly and just assumed there'd be onion in it somewhere!)
Garlic - 2 cloves, chopped or pressed
Tomatoes - ~6.5 basics largeish tomatoes (the 0.5 resulted from sandwich making), chopped as above & nasty yellow stick-like bits removed
Cheese - Grated, enough for a decent sprinkling on top of your dish (mine's Grana Padano)
Balsamic vinegar - ~1tbsp
Basil - roughly chopped, fresh is best (I have a plant :)) but I imagine dried would be ok
Salt & pepper 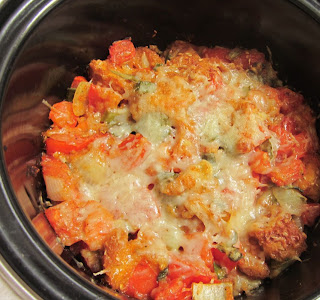 This is how it looked post-ovening
Posted by Dichohecho at 11:16