On Tuesday afternoon I was home alone and felt like breaking my chiefly vegetarian dietary habits so I opened up the freezer and looked for inspiration. The only thing that wasn't in a huge family-sized packet was some lamb leg. Probably something my Dad bought back before his heart scare, we've been policing his meat intake fiercely since then!
Anyway, I'd already planned to make tabouleh and bought parsley for it so I thought I'd make something sort of middle eastern / Mediterranean from the lamb to go with it. 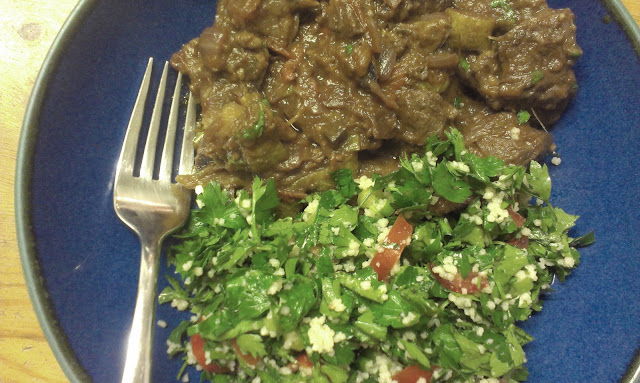 The lamb became a sort of tagine with spices and apricots, sweet and warm and a good counterpart to the fresher, sharper taste of the tabouleh. I made a couple of changes to what I'd usually do to fit with the ingredients I had - cous cous instead of bulghur wheat and an added courgette in the stew (we still have several kilos in the fridge) and a purple halloween carrot! I made my tabouleh while the stew cooked but it could be done in advance and left to sit. 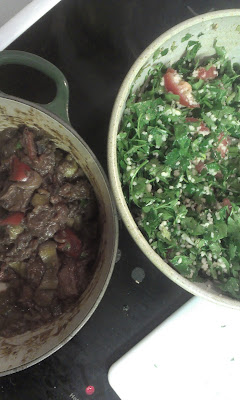 The first tabouleh I ever had was in a small Lebanese café near the seafront in Santa Cruz (CA). My friends' parents made friends with the owners and chatted about being Lebanese & Israeli in California. They encouraged me to have a tahini-heavy falafel wrap and share their tangy, lemony tabouleh, scooped up in lettuce leaves.
The tabouleh was made in the Lebanese style - more parsley based with just a sprinkling of wheat. Many commercially available taboulehs are grain-based & only seasoned with herbs. To me this is missing the point. Every time I make this I think back to the Santa Cruz sun and the lovely day we spent visiting the UCSC botanical garden, seeing sea lions on the pier, and cycling along the coast path.
First soak the bulghur in water (The Book of Jewish Food has you use cold water first & then leave it in the tomato juices for a while) and let it fluff up. Make sure you strain it well, we don't want tabouleh gazpacho (although that might be quite nice?). Put your drained grains in the serving bowl, then chop up the tomatoes into little chunks and add them.
Now chop up the spring onions, parsley and mint. Add them to the bowl and squeeze the lemon juice over the whole lot (look out for pips!). Season with oil, salt & pepper and leave to infuse. 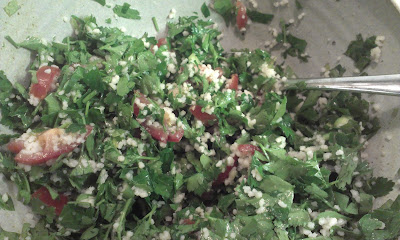 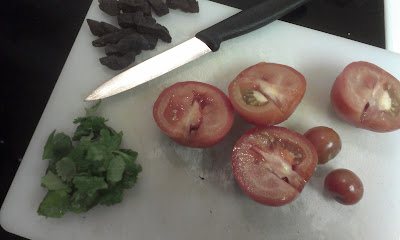 I've made North African style tagines previously but wanted to find out what Lebanese people might do with lamb. The recipes I found had some similar ingredients but the most significant difference was sumac. I didn't have any sumac. It's only occurred to me now that my sister's pomegranite molasses (not like normal molasses) might have been a good addition.
First put the olive oil, lamb, carrot and onion into a pan with a lid (I used my Mum's Le Creuset enamel-y thing) and press the garlic and ginger** into them. Add the spices and salt and pepper and begin to heat gently. Stir occasionally and allow the meat to brown, and the onions and carrot to soften. After a while add the tomato paste & keep stirring until the meat appears cooked.
Add the courgette, pepper, and half of the herbs, then give it a bit of a stir and put the lid on. This should allow the courgette to soften and mush down a bit. Once it has done so, give it another stir.
From now on you could call it done at any point, but I think it's worth keeping going. Keep the heat gentle and stir it plenty.
Eventually your stew will start to look like this: 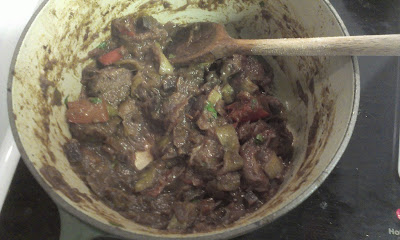 At this point it has reduced a lot and the meat falls apart quite easily when poked. The courgette had mostly disappeared now. It did pretty well at bulking out what was probably a rather mean portion of lamb.
Just before you want to eat it, stir through the rest of the herbs. 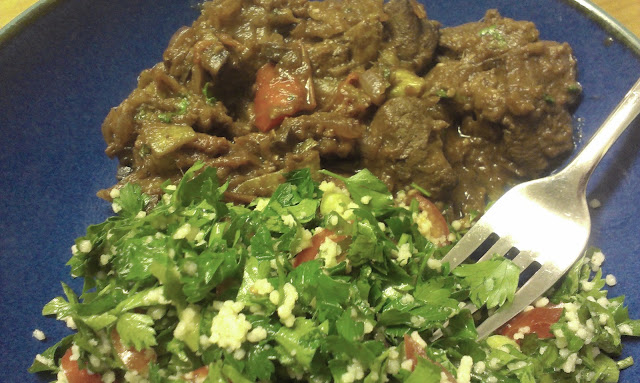 * I'm afraid I don't know how much I had as I threw the packaging away. I do know that I couldn't quite pick it all up with one hand.
** Ginger can be pressed quite easily IF you get it the right way around. You want to have the strings running down, as though they'll go through the holes. If you get it the other way you'll most likely hurt your hand and flatten the ginger without getting anything useful out!
Posted by Dichohecho at 17:00